As of today, I’m roughly two to four weeks away from delivering my first child, a little boy my husband and I have been calling the Burrito (so named because for the longest time, I didn’t look pregnant so much as like I’d been eating too many burritos). But a couple of weeks ago I finally started to pop, and as I sit here typing this our little bundle of joy is punching and kicking me from the inside. Seriously, my stomach looks a little like Sigourney Weaver’s before that alien exploded out of her.

The Burrito will be our first baby, but he’s not our first pregnancy. Our first pregnancy ended two-thirds of the way through the first trimester, due to suspected chromosomal abnormalities. The loss would’ve been devastating no matter what, but it was made all the more so for us as we A) had been trying to conceive for nearly four years and B) put ourselves through two and a half years of infertility treatments before finally seeing a positive pregnancy test. It didn’t matter that we knew early on that my hormone levels weren’t doubling appropriately, and that the pregnancy was likely to fail, because at every ultrasound, the baby grew, its heart beating strong. Doctor after doctor told us that we shouldn’t be seeing what we were seeing, but that once a heartbeat had been confirmed, blood tests became way less important than what was on the screen.

So we watched and we waited and then waited some more.  Eventually the outcome we feared came to pass. But because of all of the medications I was on, due to conceiving as the result of IVF, I couldn’t even miscarry naturally. I had to be induced. And I’ll spare you the gory details, but suffice it to say the physical loss of that baby was literally one of the most traumatic events I’ve ever had to endure.

When I told the people who needed to be told that we’d lost the baby, I did it in the most perfunctory way possible. I asked them not to make a big deal about it. I told them that we were fine and eager to try again. The latter half of that sentence was 100% true; the former, not so much.

I know a lot of women who’ve suffered miscarriages and even stillbirths, to various levels of devastation, but not a single one of us felt “fine” immediately after. How could we? We’d grown a life inside our womb, baked a baby we’d never get to know.

After you have a miscarriage, you learn just how many women you know have gone through the same thing – some multiple times, even. It’s like you’re indoctrinated into a club, albeit one you wished no one ever had to join. In my experience, women speak more freely about pregnancy loss with someone who’s gone through or is going through the same thing. Maybe because, on some level, you will never be able to understand what it’s like unless it’s happened to you, too.

As for me, I didn’t want to talk about my miscarriage because talking about it would involve talking about my infertility, and I didn’t want to talk about that because I was still in the trenches, fighting my way out. Some women find their infertility embarrassing, but I am not one of them. Our infertility was largely caused by doctors, at least initially – one who administered drugs to my husband without informing him that they’d render him sterile, the other who removed what turned out to be my “good” ovary rather than trying to save it (even priding himself on the speed with which he’d done so).

When you are a woman of a certain age, trying to conceive yet failing to do so month after month, cycle after cycle, people start to offer you a lot of unsolicited advice. Things like, “You just need to relax” or “If you stop eating dairy, you’ll get pregnant right away.” (For the record: neither of those things worked for us. And trust me when I say we tried just about EVERYTHING.)

Worse than that, though, are the soft, pitied looks, the sad eyes and heartfelt frowns. I didn’t like people asking me for updates, especially when I didn’t have anything positive to report. So I didn’t talk about my infertility, and about a year into our diagnosis, I stopped talking about wanting to have kids altogether. In fact, I was so mum on the topic that when we announced our pregnancy this past spring, several coworkers told me they thought I didn’t even like children, let alone wanted to have one of my own. Of course, I probably contributed to this misperception; whenever new babies visited the office, I refused offers to hold them – not because I didn’t like babies but because it would hurt too much to hold one that wasn’t my own.

It’s easy for me to talk about those years of struggle now, when we’re so close to crossing over to the other side. But the pain of infertility never really goes away, even for those of us lucky enough to find success after it. The same can be said for the pain of miscarriage. I still think of that little gummy bear of a baby who didn’t make it. I still wonder what might have been.

I’ve been crafting this post in my head all month long. Probably even longer than that, as I knew when the miscarriage happened that some day I’d write about it. And yet I’m doing a horrible job at conveying everything I felt, everything I’m still feeling.

I will say this: Pregnancy after a loss is a weird, weird thing. At least it’s been that way for me. I spent the Burrito’s first trimester convinced that another loss was inevitable, despite an abundance of evidence proving otherwise. I’ve spent this last one half in a daze.

So, why write about my miscarriage now, when I’m about to welcome a new life into this world? Because October is Pregnancy & Infant Loss Awareness Month, and I feel compelled to add my voice to the conversation. Plus I don’t ever want to forget the baby that didn’t make it. She gave me a lot of things in the few short weeks I carried her, but the biggest was hope. That, and the courage to keep going, even when everything inside of me was ready to give up. 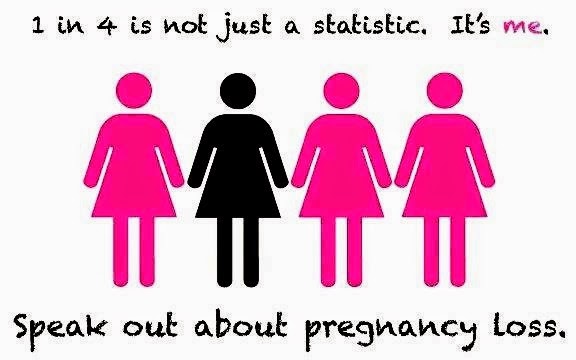